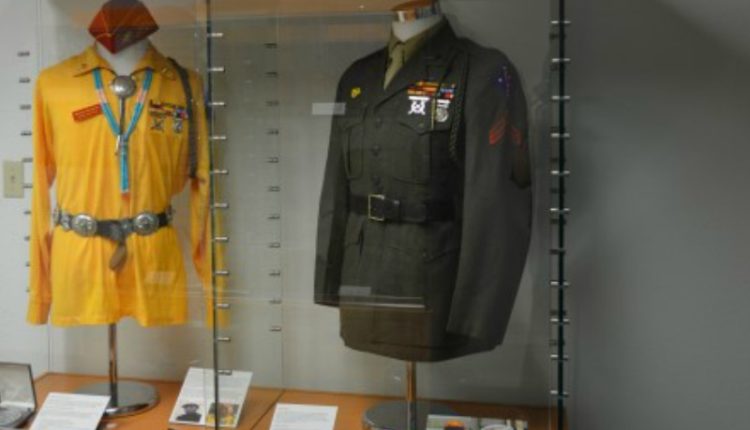 “Growing up, young Navajo were told not to speak their language.  But as young Marines in a country at war, men like Samuel Tsosie Sr., Chester Nez and Carl Gorman found their words were their mightiest weapons”.

Come and see the story of the Navajo Code Talkers at the Flying Leatherneck Museum.  Many scholars credit Philip Johnston with initiating the Code Talker idea. Johnston was a Caucasian who grew up in Leupp, Arizona on the Navajo Reservation.  He approached the Marine Corps in 1942 after the attack on Pearl Harbor and proposed using Native American Navajo language for combat communications.

His knowledge of the Navajo culture led him to bring four Navajo volunteers to Camp Elliott in San Diego, California (an area that is now part of MCAS-Miramar) for a demonstration. Impressed with successful and efficient English and Navajo translations, the Marine Corps began recruiting Navajos. The first group of twenty-nine recruits entered boot camp, took courses in military communication procedures and developed the code. Approximately 400 Navajo recruited by the Marines learned the code.

The code required proficiency in both English and Navajo. Each letter of the alphabet and common names and words corresponded to English and Navajo code words. Frequently used letters received alternate code words, requiring Code Talkers to memorize hundreds of terms in both languages.

Navajo Code Talkers located on both ends of the radio spoke their own language while using coded phrases not used in their language. For example, the Navajo word for buzzard, jeeshóóʼ, was used for bomber, while the code word used for submarine, béésh łóóʼ, meant iron fish in Navajo.

The Marine Corps deployed the Code Talkers to the Pacific, where the code proved effective and indecipherable. In addition to relaying communications, Marines in the Code Talker program performed other valuable military duties in battles such as Iwo Jima and Okinawa.

Working around the clock during the first two days of Iwo Jima, six Navajo Code Talkers sent and received over 800 messages, all without error. According to Major Howard Connor, 5th Marine Division Signal Officer, “Were it not for the Navajos, the Marines would never have taken Iwo Jima”.

The Navajo code is the only spoken military code that was never deciphered.  The code remained classified until 1968.

This exhibit will be available for a limited time — don’t miss it!