The Museum of Flying was originally established in 1974 as the Douglas Museum and Library. The Museum of Flying first opened in 1979 at 2800 Airport Avenue. The Museum was founded by Donald Douglas Jr, the second President of the Douglas Aircraft Company. The collection consisted primarily of artifacts and the ephemera of Donald Wills Douglas Sr., the Founder and President of the Douglas Aircraft Company, however, the collection did not include any aircraft. 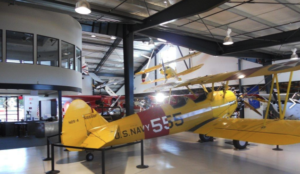 Over the years the Museum has hosted a number of special events that have included annual gala events honoring the aviation and aerospace leaders, famous test pilots, and the original Mercury, Gemini, and Apollo astronauts.  Other memorable events held at the Museum included a tribute to the Tuskegee Airman, a Mustang Wing’s and Wheels event, and a 60th-anniversary celebration of the Battle of Britain.

Construction began on the new Museum in early 2010 and the Museum celebrated its grand opening to the public in the new building on February 25, 2012.  The Museum Of Flying collection consists of the many original artifacts related to the Douglas Aircraft Company, a variety of exhibits, aviation art, and features an array of aircraft from a Wright Flyer replica to aircraft of the jet age.

Hours of Operation: Wednesday through Sunday, 10 am to 5 pm, year-round.

PLEASE TAKE NOTE THAT THE MUSEUM WILL CLOSED TO THE PUBLIC ON THE FOLLOWING DATES IN ORDER TO ACCOMMODATE PRIVATE EVENTS: