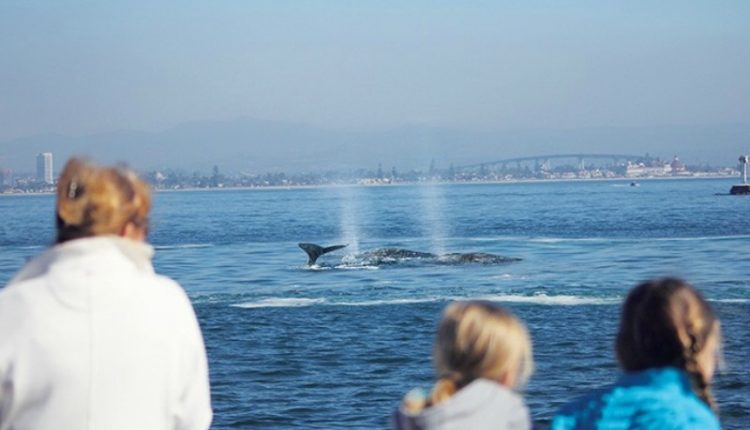 If you’ve never had the opportunity to go whale watching, now is the time to do it, during your visit to San Diego. With 70 miles of coastline directly in the migration path of 20,000 gray whales on their way to Baja California to give birth to their calves, San Diego is one of the best places in the world to see these giant mammals in their own environment.

Primetime for whale watching in Southern California is December through January for the southern migration and February through March for the northern migration. Gray Whales generally travel alone or in pods of two or three: at the peak of migration, a dozen or more may be seen together. They cruise slowly nearshore waters at a speed of two to six miles per hour. Grey whales are close to forty-five feet long. Males grow longer than a city bus while the female is slightly larger. Their skin is marked with patches of white and barnacles.  An average grey whale weighs about 16 tons but on the extreme, you can see some which weigh more than 30 tons. Rarely do whale watchers come closer than 100 yards to migrating whales, but even from the distance of a football field, it is a thrilling sight that most never forget.

Gray whales once graced both the North Atlantic and North Pacific Oceans. They were extinct in the Atlantic several hundred years ago, for unknown reasons. In the North Pacific, two separate stocks are currently recognized. The western Pacific population, comprised of just a few hundred animals, is endangered. Today, gray whales thrive only on the eastern side of the Pacific.

Most whale watching tours are about three hours long and are narrated by captains who will help you spot the whales as they share interesting facts about them, sealife and the local geography. Whales are not the only form of marine life you will see on a whale watching cruise. Dolphins and porpoises are the travel companions of gray whales. Be sure to bring your camera to capture this once in a lifetime experience!