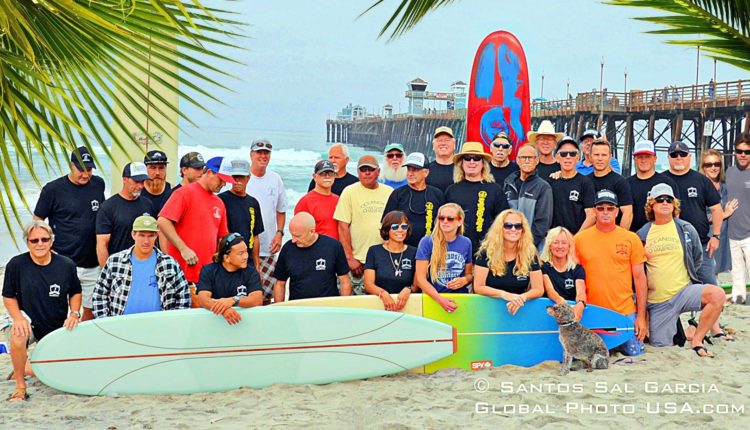 The Oceanside Longboard Surf Club has its roots in the original Oceanside Surf Club started in the 50’s. Members and associates included LJ Richards, Phil Edwards (our logo is based on his classic turn), the Eaks brothers, and many others, as Oceanside was one of the early hotbeds for California surfing.

The club faded into memories in the late 60’s and early 70’s and was rejuvenated in the early 80’s as the OLSC. The membership was limited and meetings informal in the beginning, being conducted at member’s houses with typical attendance of ten to twenty men. The first club contests were held in 1985, with Santa Cruz and Oceanside reciprocating with formal invitational contests. In those days they were among the few longboard contests and, through Donald Takayama’s influence, participation included a strong contingent from Hawaii as well as contestants from Australia, with names such as Aipa, Keaulana, Kalama, Sunn, Young, and “Twizzle.” Through the late 80’s and early 90’s the roster at our annual contest was a who’s who of longboarding. The venue and format has remained the same, Oceanside Pier and Bandshell, Luau, and entertainment. As longboarding continued to grow, so did the number of clubs and contests.

The 33rd Annual OLSC Contest, designated as a Coalition of Surfing Clubs Event, will begin on Saturday, August 12, 2017.

A trade show will be in the band shell area on the south side of the pier where vendors offer their wares through the weekend. OLSC will host a beer/wine garden and there will be entertainment at the band shell throughout the event.  We will be conducting product and surfboard raffles as well as a silent auction of surfboards.

Immediately following the last heat on Saturday, the “Varua Tahiti e” Polynesian dancers will perform.  Hunter Steakhouse will serve dinner in the band shell area when the performance has concluded. Dinner is included in your entry fee.  Tickets will be on sale to the public.